Deadman fire lookout tower is one of the few remaining fire towers in Colorado. It sits approximately 15 miles west of Red Feather Lakes along Deadman Road (County Road 86) at an elevation of 10,700ft. The original tower was a wooden structure constructed in 1939 by the Civilian Conservation Corps based in Red Feather Lakes. It was replaced with a modern steel tower in 1961. The site of the original wooden tower is still evident, with its concrete anchors located just north of the current tower. The current tower stands at 55ft tall, the original tower was 40ft tall.

The CCC built a garage in addition to the original tower. 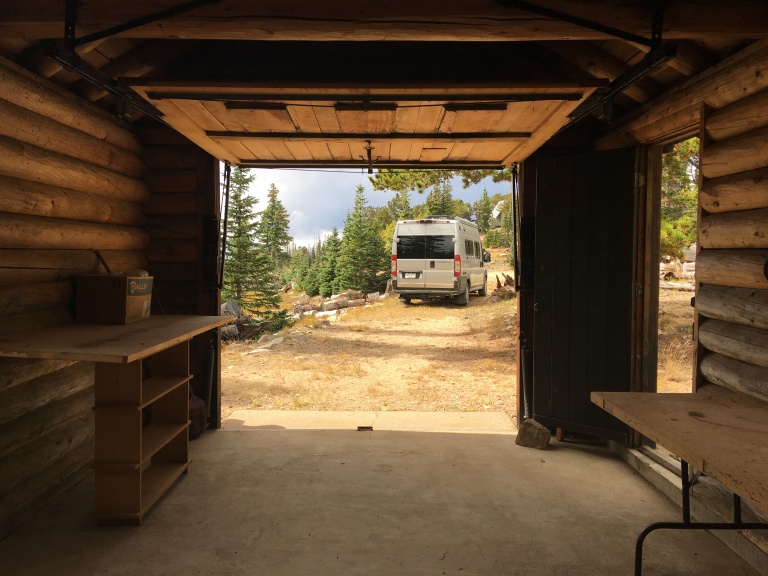 On a clear day, you can see Laramie Peak some 102 miles to the north, and traffic along Interstate 80 in Wyoming. You can see portions of the plains, and some days it is possible to see the Rawhide Power Plant along I-25 in Northern Colorado. Due to the curvature of the Earth, you cannot see Nebraska or Kansas from the tower.

The last time Deadman Tower was officially staffed by the Forest Service was in 1970. Today, Deadman Tower is described by the Forest Service as the “visitor center in the sky.” It’s staffed during the summer months by volunteers, and open to the public from 10am to 4pm. Much of the original equipment is still at the tower. Volunteers work in 1-2 day long shifts, sleeping in a bed located in the tower. One volunteer described to me the view of the stars on a clear night was akin to a real life planetarium.

An Osborne Fire Finder is also in the tower, the original one used to identify locations of fires when the tower was still officially in operation.

The Story Behind the Name

As is natural to inquire about, it’s of interest where the name “Deadman” was inspired. No one story is universally accepted. Everything that follows has been sourced from the Volunteer Handbook in the tower. One account tells of an early trapper who was in his cabin when a grizzly bear broke into it. Both the trapper and the bear were killed in this encounter. Another account says he was killed in his own trap when it snapped shut on him. Allegedly the trap that killed him is in a museum in Fort Collins. Some also say that a skeleton was found in Deadman Park, a site which has hosted everything from a logging camp, a Guard station, to a German POW side-camp during WWII.

Other stories have it that a man was killed in a freighting accident, either through a runaway truck rolling down an embankment, or the wagon filled with dynamite was struck by lightning and exploded on Old Freight Road in a canyon that is now known as Deadman Gulch. The current road over Deadman Hill is County Road 86 (or Deadman Road). This used to be the shortest route to Walden, and was frequently used as a freight route, which in its heyday would have carried dynamite for mining operations in the area. Still, others say that there were numerous reports from Native Americans of finding dead men from time to time in the general area.

An excerpt from the Official Volunteer Handbook for the tower issued by the U.S. Forest Service mentions “The Ghost of Deadman”:

Haunted or not, one thing is sure: the tower is a great place to visit on a weekend adventure from Fort Collins, or while camping, or even from Wyoming. A drive to the tower from Fort Collins takes about two or two-and-a-half hours. A drive from Laramie would probably be an additional hour to that. The view is phenomenal, and the tower is one of the lesser known attractions in Colorado. It is remote when compared to the popular places to visit, but it is also hardly a tourist trap. The majority of visitors are just stopping by while mainly partaking in other recreational activities.

Special Reports must be really special because they also get their own link in the main menu at the top.