Detouring through Collbran, CO, in order to avoid Interstate 70 just confirms even more that the choosing the side route often leads to a greater journey, and is certainly worth it if you’re not in a hurry. This is a sensible side route if you’re traveling to Grand Junction (hint: ultimately to Moab) and not in a rush. It doesn’t tack on a lot of extra mileage (unless you go over the Grand Mesa), but it does tack on an additional 20-30 minutes compared to the same route via I-70. The first time around doing this, I decided to take a cruise over the Grand Mesa (in November, as you do), which was interesting and got a little squirrelly upon encountering a blizzard and a foot or so of snow. The Grand Mesa could be a trip in its own right and something warranting its own post, but I’m including a little bit on it since it’s worth mentioning and I wouldn’t have gone up there to begin with if I didn’t go through Collbran.

Collbran itself is a cute little town, not much to see and very down to Earth. Coming in from Road 330 E (the road from Silt, CO/I-70 over the mountains to Collbran), you turn left on to Main St after passing an abandoned gas station. On Main St, there is a liquor store, an Ace Hardware, a cafe, a grocery store, and some other little shops. Continuing on to State Highway 65, there is a gas station, the Collbran Job Corps (a CCC installation), some office buildings, and a medical center.

The route from Silt to Collbran is interesting. Immediately after passing over I-70, you begin slowly ascending towards the mountains in the distance. The first part of the drive is mainly through private property, farms, homesteads, and the like.

Eventually the road turns from paved to gravel, this marks the start of the climb to the top of the pass. The views looking back from the ascent are great. It is surprisingly developed along the road once you enter Grand Mesa NF. There is evidence of oil/gas exploration, as well as several homesteads and cabins dotted along the way. It is not long until the road becomes paved again and you start descending down the valley to Collbran, CO. Once in Collbran, I stopped to pick up some booze and grab a coffee. Then I debated what to do next. I started heading towards SH-65 but made a U-turn and headed towards the 10,000ft+ elevation Grand Mesa. It was an admittedly hasty decision to go over the Grand Mesa in November, especially because there was over a foot of snow up there, and a blizzard. I have a rule of thumb not to be the first tire tracks on a snow packed road, which I wasn’t, so I continued.

The ascent from Collbran was sphincter-clenching and steep, but I made it. Near the top of the first climb (roughly 9,000ft elevation) it leveled out a bit and the snowpack became evident.

I had doubts about whether or not to continue, but the road was well-packed by previous vehicles and the road up was steep enough that I didn’t exactly like the idea of having to go back down a steep slippery road.

Keep in mind, I’ve never done this route before, ever. I do not condone going up a steep mountain road in late November that you’ve never done. But it was also kinda fun.

There are some summer houses atop the Grand Mesa that were boarded up and closed but there were some people still moving out. After getting out of the deep woods, there were a few people at their houses in snowmobiles and pickup trucks. I knew I was getting close to SH-65 at this point. Highway 65 is the Grand Mesa Scenic Byway, and it is certainly scenic. 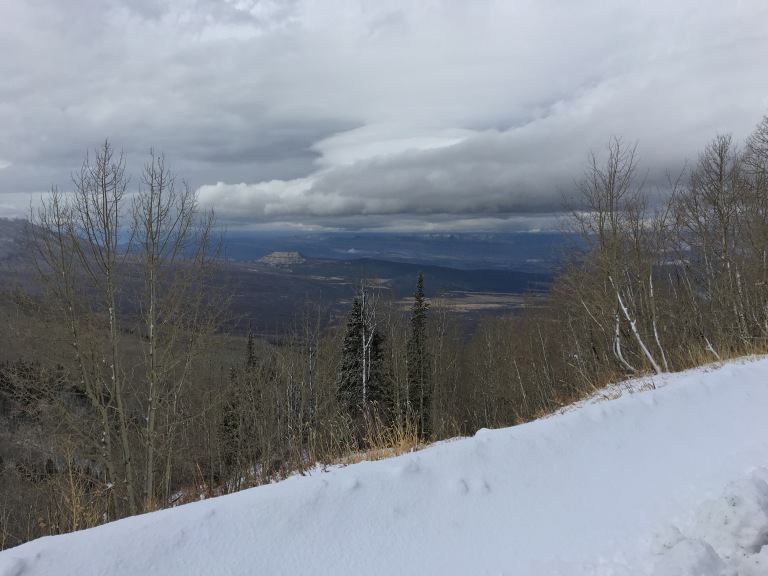 It was definitely cool up there and I plan on going back for a more detailed write-up of the Grand Mesa. The damned thing is giant but pretty flat at the top as mesas are supposed to be.

Continuing down Highway 65 you pass the intersection with the Road 330 to Collbran, and continue down the canyon to meet I-70/the Colorado River.